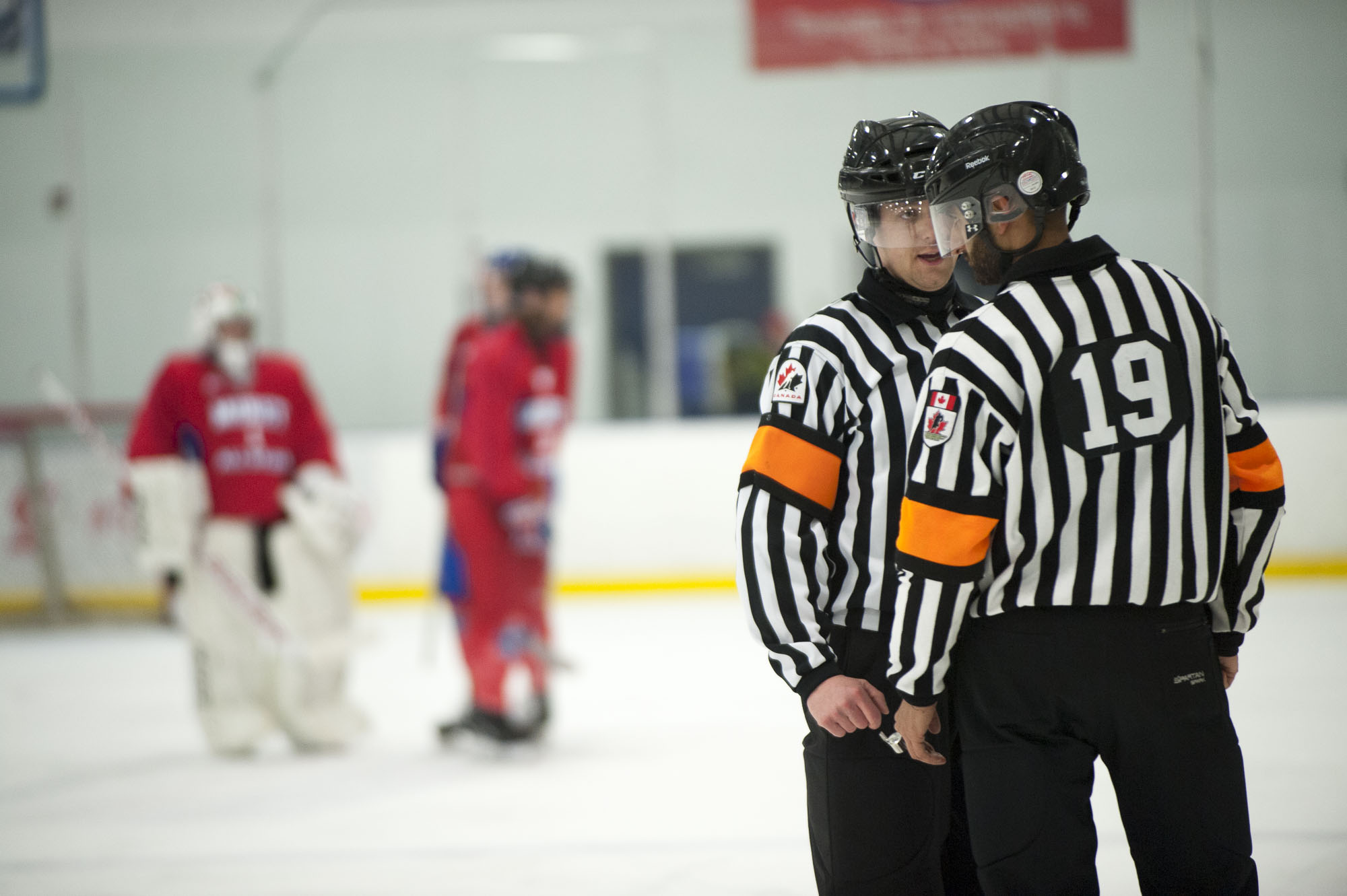 After pulling on a hockey jersey for over a decade, in 2013, Mitch Muhvic took to the ice wearing a different sweater, one with white and black stripes. At the time, Muhvic was a high school student looking to make some money and learn the game from another angle. Six years later, Muhvic continues to give back and stay involved by suiting up as an official four days a week in arenas across the GTHL. In a skates-off feature, Muhvic let us step inside the mind of a referee…

Q: WHAT IS THE MOST MISUNDERSTOOD CALL?

A: I believe the most misunderstood call in hockey is the “kicking motion” rule. The rule means a goal cannot be scored off the skate when there is a ‘distinct kicking motion’ used, however, a goal that is deflected or directed off a skate of a player will be deemed to have legally entered the net.

Q: WHAT GOES INTO OFFICIATING THAT PEOPLE DON’T SEE?

A: The mental preparation and communication aspects of officiating are huge. Learning and understanding the tendencies of players and coaches, the ability to remain calm, manage emotions, etc., all go into refereeing a good hockey game. In terms of behind-the-scenes development, I’ve subscribed to the respective league’s game streaming website so I can watch video of my games and see what goes on from an off-ice perspective.

Q: WHAT IS THE BIGGEST MISCONCEPTION ABOUT OFFICIATING?

A: A big misconception people have about referees is thinking we have a favourite team or one we want to win the game – this is not true. Referees could care less about the end result, the focus is on staying consistent for all three periods, which is one of the hardest parts of the job.

Q: WHAT SHOULD PEOPLE KNOW ABOUT OFFICIATING?

A: Officiating isn’t easy and referees are trying their best. Just because a ref missed one call in the first period, does not mean the game is over.

Q: DO THE CALLS OFFICIALS MAKE VARY BETWEEN LEVELS – FROM NOVICE TO MIDGET?

A: Calls stay consistent regardless of the age division or level, however, there are different approaches to take with players and coaches at the different ages or levels. For example, when officiating an atom game, I try to take a more coaching-style approach with the players in communicating why they received a penalty and what they could have done differently. Whereas in a midget game, it usually is just a brief explanation to players who already understand the rule.

Q: WHAT IS THE BEST PART ABOUT YOUR JOB?

A: The best part is getting to be a part of some good hockey games and having fun on the ice with fellow officials and the players.

Q: WHAT ADVICE WOULD YOU GIVE ASPIRING REFS?

A: My best piece of advice is to learn from your bad games and move on. Don’t get too hung up on a bad performance that you, players or coaches didn’t like. Review your game to see what you can improve on and be better in the next one. Everyone can take things from their good and bad games.