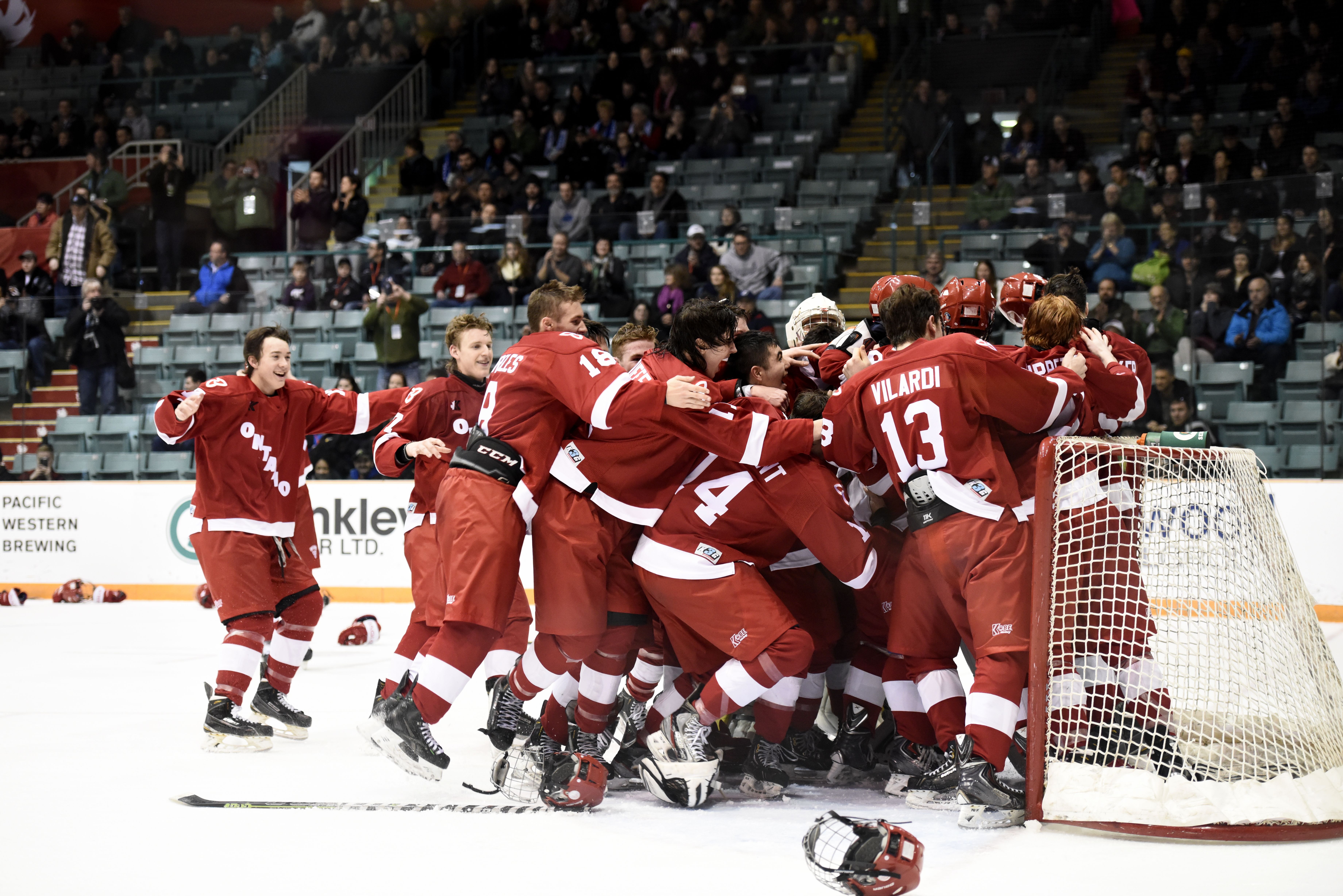 Eleven GTHL players were part of Team Ontario’s men’s hockey team that won the gold medal at the 2015 Canada Winter Games in Prince George, B.C. Below are recaps of each of the game

This marks Ontario’s fifth gold medal in men’s hockey at the Canada Winter Games and first since 2007 in Whitehorse, YT.  That roster featured current NHL stars Steven Stamkos, Cody Hodgson, Alex Pietrangelo and Michael Del Zotto, who helped the club earn a 6-4 win over Team Manitoba in the final.

This year’s victory also avenged a loss to Alberta in the bronze medal game at the 2011 Games in Halifax.

McLeod opened the scoring midway through the second period with his team-leading sixth goal, tied for fourth among all players. He also finished in second place on the club – and tied for sixth overall – with 11 points, one behind leader Gabriel Vilardi (5-7—12).

Owen Tippett notched an assist on McLeod’s goal, while Nick Suzuki notched his third goal of the tournament and first game-winner.

Michael DiPietro stopped 29 shots – and was one second away from his third shutout of the Games – to improve to finish with a 4-0-0 record, 0.75 goals-against average and .971 save percentage in four appearances. Fellow netminder Brendan Bonello (Toronto Titans) won both his outings, stopping 35+ shots in both games.

Seven of the top eight scorers on GTHL were representatives from the GTHL. Final stats for GTHL contingent:

The team finished with a tournament-best 54.2% efficiency on the man advantage and a 90.5% success rate on the penalty kill (3rd).

Semifinal vs. Team Quebec
Down 2-0 after 20 minutes, Team Ontario scored five unanswered goals to rally past Team Quebec and earn a berth in the gold medal game at the 2015 Canada Winter Games.

After Gabriel Vilardi tied the game with two goals in the middle frame, Toronto Marlboros forward Ben Jones scored the go-ahead marker at 7:41 of the third period.

Vilardi and McLeod pace the club with five goals; they also rank first and second with 11 and 10 points, respectively.

Ontario will face Alberta in the final, a rematch of the bronze-medal game from the 2011 Canada Winter Games in Halifax.

Team Alberta finished first in Group B and scored a power-play goal in each period for a 3-1 win over Team Manitoba in the semifinal on Friday.

Quarterfinal vs. Team Saskatchewan
Team Ontario jumped to a 4-0 lead in the first period – powered by goals from Ryan McLeod (2-2—4), Simon Boyko (2-1—3), Owen Tippett (1-2—3) – and added five more tallies to post a 9-0 win over Team Saskatchewan in the quarterfinals at the 2015 Canada Winter Games.

Ontario will face Quebec in the semifinal, after that team earned a 6-3 win over host British Columbia, avenging a gold-medal game loss at the 2011 Canada Winter Games in Halifax.

Team Quebec posted a 2-1-0 record in the preliminary round to finish second in Group B. The teams will face-off at the CN Centre tonight at 10:30 p.m. ET.

Team Alberta and Team Manitoba meet in the other semifinal at 7:00 p.m. ET.

Preliminary Game 3 vs. Team British Columbia
Making his second start of the tournament, Toronto Titans goaltender Brendan Bonello stopped 35 shots to backstop Team Ontario to a 6-4 win over host British Columbia and a perfect 3-0-0 record through the preliminary round.

Ontario fell behind for the first time in the tournament early in the opening period, but pulled ahead before the end of the frame on goals by Isaac Ratcliffe (1-1—2) and Gabriel Vilardi (1-1—2).

After North Vancouver native Jordan Bellerive tied the game, Titans teammates Markus Phillips and Joseph Gareffa (1-1—2) each found the back of the net as the Ontario tallied three straight goals before holding on for the win.

Team Ontario will face Saskatchewan in the quarterfinals on Thursday at CN Centre in Prince George (10:30 p.m. ET). Saskatchewan defeated Newfoundland and Labrador 4-1 in the qualifying round to advance.

Forward Ben Jones led the club with two goals on Sunday, but it was his Toronto Marlboros teammate Ryan McLeod who carried the load offensively against New Brunswick. McLeod (1-2—3) shared the team lead with three points, all captured via the power-play, including the opening score late in the first period.

Team Ontario can clinch first place in Group A with a win Tuesday against British Columbia; the host province defeated Ontario 5-2 in the semi-final at the 2011 Canada Winter Games in Halifax, en route to a gold medal.

Brendan Bonello of the Kraft Cup champion Titans was in net for the victory.

Team Ontario plays the remainder of its preliminary round against Group A rivals New Brunswick and British Columbia. The top three teams in Group A will advance to the quarter-finals, while the fourth place team will play in the qualifying round.