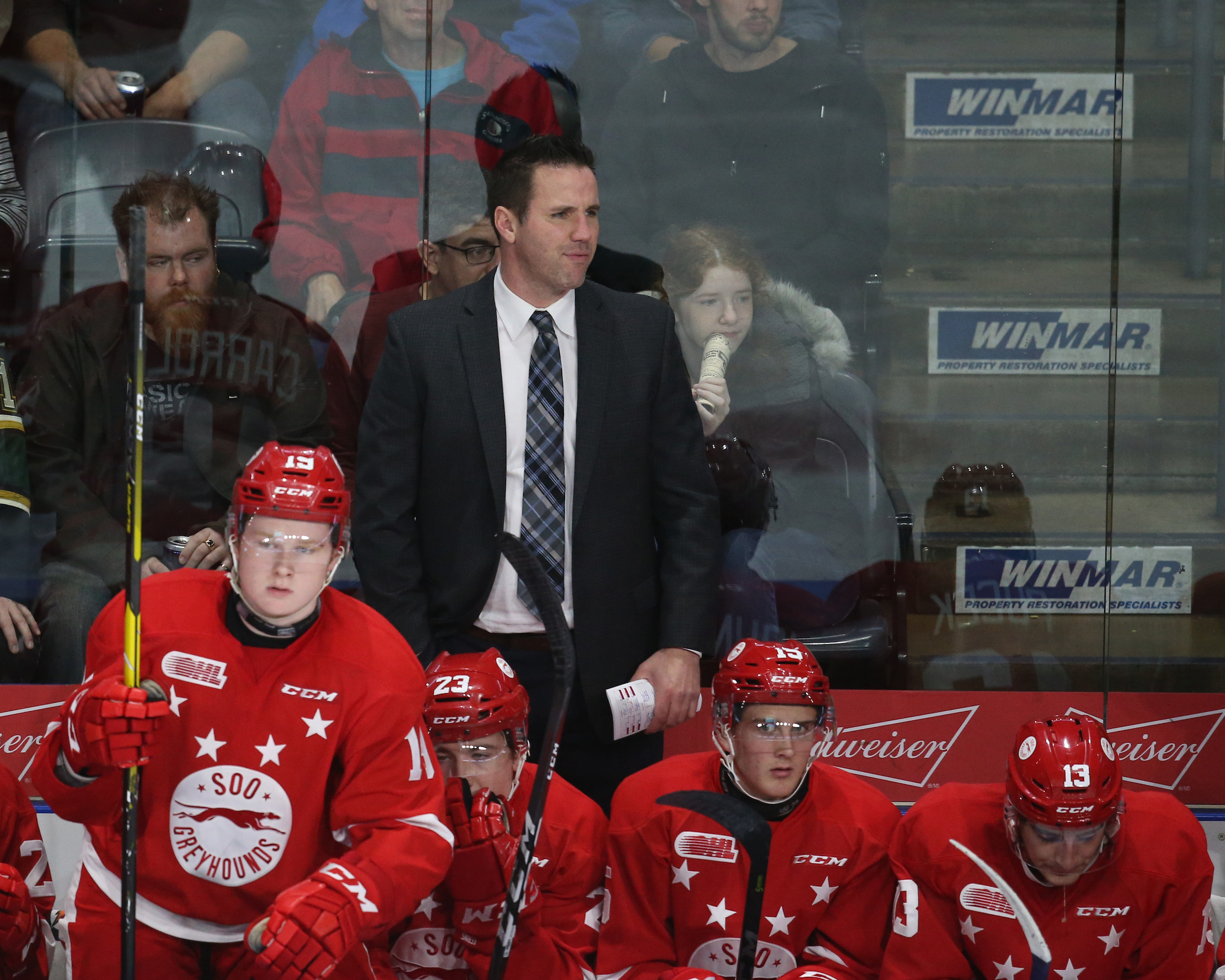 Before becoming the Head Coach of the Sault Ste. Marie Greyhounds of the Ontario Hockey League, John Dean spent time coaching in the GTHL. Heading into his fifth season as the Greyhounds’ bench boss, the GTHL caught up with the Don Mills, Ontario native.

GTHL: What got you into coaching?

DEAN: Coaching, for me, started when I was about 24 years old. I just came back from playing in Amarillo, Texas, and an old baseball coach reached out to me and asked me if I wanted to help out with the hockey team he was coaching. I got on the ice with him and I thought it was a great idea to give back and stay in the game. To be honest, I fell in love right away. One thing led to another, and here I am talking to you about 17 years later – it’s definitely been an unbelievable journey.

GTHL: Who would you say is your biggest influence in hockey?

DEAN: I had a lot of influences. I learned from a lot of different people along the way. I got a great opportunity in North York; a guy by the name of Spence Kirton, whom I believe is helping out with the Don Mills Flyers this year. He was a big influence on me early on. As I got moving up the ladder, I started to study different coaches that I didn’t necessarily know. As I got into Junior A, I formed a really good relationship with Greg Walters [Owen Sound Attack’s Head Coach], whom I now coach against. I bounced a lot of ideas off him early on in my career, and we still bounce ideas off of each other.

GTHL: How would you describe your coaching style?

GTHL: How important is it for a coach to maintain a good relationship with their players?

DEAN: I think it’s very important, but it’s easier said than done. I think it’s difficult when you’re continuously critiquing players and helping them evaluate themselves. It’s difficult to draw that line in the relationship. I think the most important thing is to show players that you care and when players think you have their best interest at heart generally, you get a really good response. It’s important that you look at people or hockey players as a person first and a hockey player second, and usually, you find success that way. Quite honestly, it’s more fun for a coaching staff that way, too.

I like coming into a rink and figuring out what the guys are up to and what they’re doing in their life, and how their families are doing. I think that’s an important aspect. It’s refreshing for me, and when you get into the coaching side of it, it’s advantageous because there’s a nice relationship; there’s a really good foundation.

GTHL: How would you describe your coaching philosophy?

DEAN: I try to be as relationship based as possible, but I also like to hold guys to a very, very high standard. We like to get to a point with our team where that high standard’s embraced and it’s something exciting because we know it’s going to be rewarding for us in the long term. The big thing for me is that relationship side of it and maintaining it. Also, walking that fine line where we keep each other accountable in a way that generates a lot of success for the individual and for the team.

GTHL: What have been some of the biggest difficulties you have faced while coaching?

DEAN: Early on, it was not being able to separate results from the process. As a younger coach, I was very results-oriented. I took wins and losses really hard. Now, it’s understanding the process – managing your highs and lows. As I’ve grown as a coach, I like to believe that when I’m seeing good things happen, when I’m seeing the foundation from that, we can draw some positives from every win and loss.

GTHL: What do you think is the most important thing for a coach to build a successful team?

DEAN: The habits that you instill in your team and the culture inside your dressing room, on and off the ice, I think, is the most important. You’re nothing without your foundation. You can have all the incredible systems and skills you want. If you don’t have a foundation you can turn to if things go bad, and hey, we know that is there, you’re not going find a lot of success at any level.

GTHL: What are some of the biggest changes you’ve noticed from when you first started coaching compared to now?

DEAN: The game has changed significantly. You’re seeing some significant changes in the style of play – the skill level of the players nowadays is incredible. We get players coming into this level that have an amazing amount of potential, skill, and doing things I never thought players would be able to do.

I also think players have to trust you as a coach. You have to explain the “why” of things and how this is going to accomplish the goals of the individual and for the team. That’s fun, I think; explaining the why and getting players to buy in. I think this age group and this level that I coach is massively misunderstood. They’re an incredible generation that challenges you, has an enormous skill set, and some unbelievable ideas. I learn a lot from the players and I think that’s where it’s changed, because I think it was more of a one-way street before.

GTHL: Being a coach, what do you take pride in the most?

DEAN: The relationships and players reaching out to me after they’re gone. That’s when I know we’ve done something right here when I continue to get calls and messages. Just watching the successes of the players, whether it be on the ice or off the ice. We have players that have found success in business, as lawyers, as hockey players, all facets of life; it really is exciting. When you step away from the results, and you see what some of these young men have done, it’s pretty cool.

Check out more from the 2022 Fall Breakout Magazine!