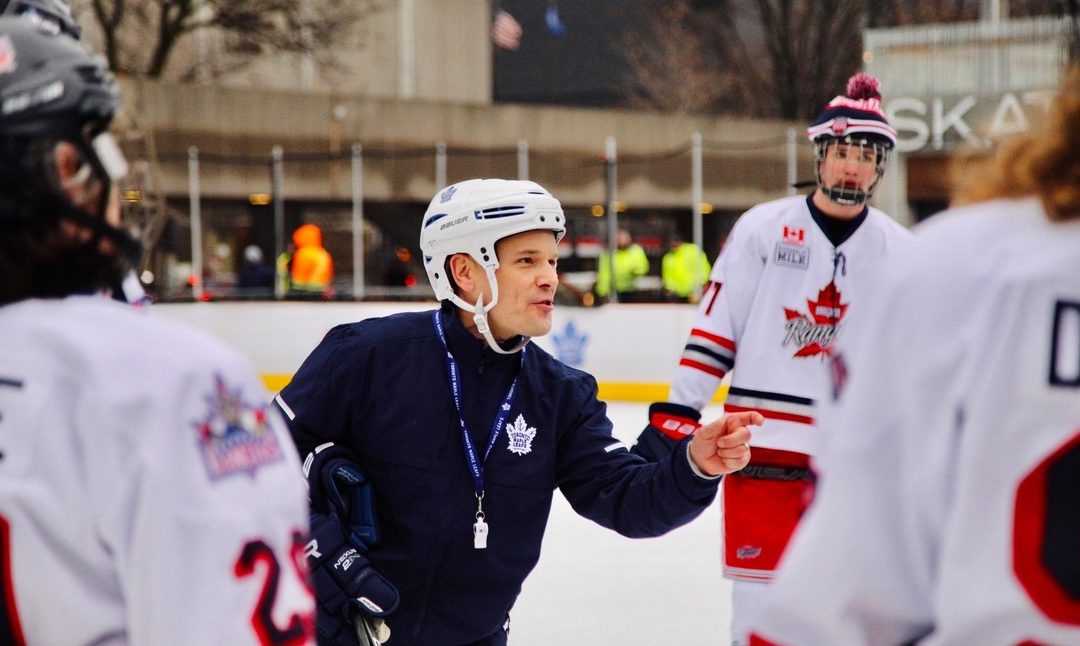 Click here to view the 2022 Fall Breakout Magazine in your browser.

In 1999, Greg Schell began with the Toronto Maple Leafs working in security services. Now the former GTHL coach and elected member of the National Hockey League’s Youth Development Advisory Board is Hockey Development and Sport Partnership for the blue and white. Schell sat down with the GTHL to discuss his early beginnings, development in the game, and more.

GTHL: How did you end up working for the Leafs in this particular position?

GS: I actually wanted to be a police officer. The five places that I applied, I ended up getting all four jobs and the Leafs were the last to call me and bring me in for an interview for security services. I thought, you know what, I can’t do this — I’ve got four part time jobs already and school.

I mapped out my time with all the jobs and I figured it out — but I ended up working in security services at first. Then, in 1999, there was a Summit held for the minds of hockey to grow the game – Wayne Gretzky was involved, Ken Hitchcock, Trevor Linden, the list goes on.

Ken Dryden was a part of it and he was my boss at the time. He came back to the Air Canada Centre with all these recommendations that had come out of the Summit. One was all NHL teams in Canada were going to hire a hockey development person to manage and operate programming that’s going to support the growth of minor hockey. He looked at me and said, “You’re my guy.” I said, “Perfect.” You don’t say no to that.

GTHL: You’re an elected member of the NHL’s Youth Development Advisory Board, which includes bigger conversations surrounding the sport’s big picture goals. What do those goals look like for hockey today?

GS: COVID allowed us to sit back and really get our minds to be creative — the whole idea was how do we keep kids engaged? It’s really been about collaboration between all teams, helping to do stuff together as one, even though we’re competing on the ice, but at the end of the day, we need to  come together and help shape the future of hockey as the National Hockey League. This has filtered down to organizations like the GTHL and how we can help make it easy to grow hockey from the beginning so that we’re stronger than ever.

GTHL: What do you think the most important thing is for kids developing in this sport, not only as young athletes but as people?

GS: The cornerstone is to be humble and kind in everything they do — for athletes and their families. It takes attitude and a mindset first. You work with athletes based on their attitude and then train them for their skill, so you can get the absolute most out of them and ultimately selfishly speaking, they can get the most out of you. Take advantage of good things that people want to do, keep that humble, kind, great attitude approach and you’ll be successful in anything you do.

GTHL: You were involved with the GTHL as a coach for a number of years. What would your advice be for coaches?

GS: The most important thing in a child’s life outside of health and family is academics. It’s in a child’s life Monday to Friday, September to June. But we don’t go to school 12 months a year, so you don’t need to play hockey 12 months a year. On the first day of school, kids are excited — new backpack, new classroom — they’re genuinely excited to go back. If you take athletics away for a little bit, they’re going to come back with a little bit more love in the end.

It’s our job to raise these kids and to put them in a position to be successful — and to hopefully be better than us. I think if you can give kids the opportunity to try other sports, give kids a chance to take a break, that’s when we’ll see how much kids will thrive.

The second thing is, the first or second biggest influence in a child’s life is an educator — why can’t a coach be like a teacher? If you put your head in the space of a teacher when you’re coaching a sport, you’ll have a win-win because these kids are already prepared to learn from educators – they’re familiar with the learning process. That’s how you’ll have the ability to impact a child’s life and make a difference.

GTHL: What do you hope is the main message kids take away from someone like you?

GS: We dare kids to dream, right? We dare them to find ways to be excellent in everything they do. When we’re working with kids, people will come up and say they’re a good hockey player – now you must be if you want to play in the NHL — but we tell kids no. You don’t want to be in the NHL, you want to be in the Hall of Fame. At the end of the day, if you fall short, anything less than that is still incredible because you have worked towards a dream — you could still be a Stanley Cup Champion, play in the NHL, or if you can’t, you could be a builder, an owner, you could be in some category that could influence the sport and you can continue to grow and change the game.

GTHL: What would you say to families who want to try hockey?

GS: I would say start with a fun, casual environment on your own time, in your own space. Play ball hockey out in the street with some friends, pick up a stick and get a feel. Start with the basics — a math teacher doesn’t throw algebra at you in the first lesson. Maybe it’s putting your skates on for the first time and wearing them around the house before actually skating so you can feel the balance and the coordination versus going on the ice and hating it to start. It’s all about finding the perfect environment for you to begin and feel success.

Check out the 2022 Fall Breakout Magazine for all these stories and more!