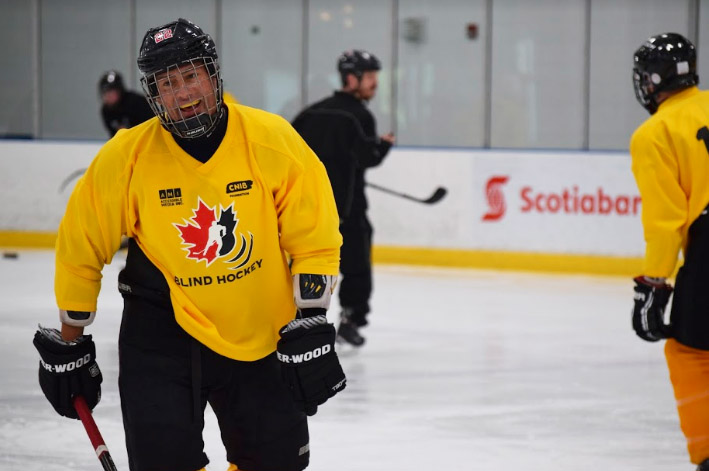 The first thing you notice, inevitably, is the puck. Bigger than the regular vulcanized version, it’s also hollow, equipped with bells inside of it, making a noise as it moves along the ice.

The second thing is not something unique, but rather something familiar, recognized instantly when watching any hockey practice. A coach with a whistle describing drills, players rapt, waiting anxiously, and then the cacophony of sounds that ensues when a drill starts, pucks hitting sticks or going astray, players yelling out to each in between reps.

Hockey players across the country came together with the common goal that drives any team representing the Red and White at any level of hockey, to be the best team out there.

The camp was previously held in Vancouver, but its relocation to Toronto makes sense, considering the amount of

GTHL connections running throughout the team. Forward Mark DeMontis has been a staple on the National team, and is the co-founder of the Canadian Blind Hockey Association. He plays under the watchful eye of his brother Luca, who is currently the general manager of the team. Growing up in the Weston area, both brothers recall fondly playing in the ‘G’ for teams such as the York Toros and Duffield Devils.

“The first time I was ever told I was being diagnosed with LHON (Leber hereditary optic neuropathy), I remember looking at the

doctor, he was telling me I was going blind, and the first thing I said to him was, am I going to be able to make practice tonight at 6:00 practice” recalls Mark.

Missing passes at practice that night, Mark quietly acknowledged his new reality. He quickly got involved with the Toronto Ice Owls, then the only team for visually impaired players, continuing to play the game he loved. The Canadian Blind Hockey Association was next, and while Mark originally was focused on the grassroots level, the adult side began to develop dramatically and needed some strong on-ice leadership to ensure its improvement.

“I can remember the first year that I went out on the ice with vision-impaired players I was absolutely in awe of their abilities” says Kerins, who is now entering his 6th year as head coach of the team, and as the head on-ice coordinator for Canadian Blind Hockey, has helped oversee the rapid development of select and youth divisions, growing alongside the national team.

The on-ice skills on display were certainly impressive. Many of these players had previously played at the ‘AAA’ and junior level. But it is also a by-product of the unique chemistry emanating from the dressing room.

“In our dressing room, we all know what are challenges are, there mostly challenges outside the rink in life” says Mark. “When we come in the dressing room there’s two things, one, we can all relate to each other but two, as a team we can escape from all that too.”

All the increased competition meant tough decisions for Luca and Paul and co., who had the tough task of whittling the group of 22 down to 17, in advance of their 3rd international series vs the US in Ottawa this coming November.

“Last year we had a really good team, last year we had an incredible team, it was our first ever Canadian national team, but this teams better than last year’s team” states Luca. “We want to build and be dominant for years, just like typical hockey Canada.”

While the program is only gaining momentum, and for the players like Mark, that is truly a special thing.

“If I never lost my sight, there’s no way I would have played for team Canada. Sometimes the biggest challenges we face in life can be our next biggest opportunity”.