Hockey faces many barriers. Registration is down in the last decade, first generation Canadians have little interest in the game and the competition from other sports, such as basketball, soccer, and tennis is intense.

The Transition Game Summit in November of 2019 kicked off an all-encompassing initiative to re-imagine minor hockey in the Greater Toronto League. The League and its stakeholders have been working alongside strategic consultants to explore unique strategies and tactics for igniting change.

A wide variety of people who attended the Transition Game have been hunkered down in varied and complex discussions.  The participants have a diverse set of skills and experiences and include people from the local world of hockey, business, other sports organizations, corporate partners and members of the GTHL Board.  The four pillars that were initiated during Day Two of the Transition Game, which are illustrated in the accompanying graphic, are The Game, The Community, Stewardship, and The Organizations.  All big topics that have stimulated some interesting ideas.

The goal is to create a united approach to minor hockey within the GTHL.  There is still work to be done and your contribution will still be required if we are to successfully move forward into a welcoming, creative GTHL that emphasizes excellence in everything we do. 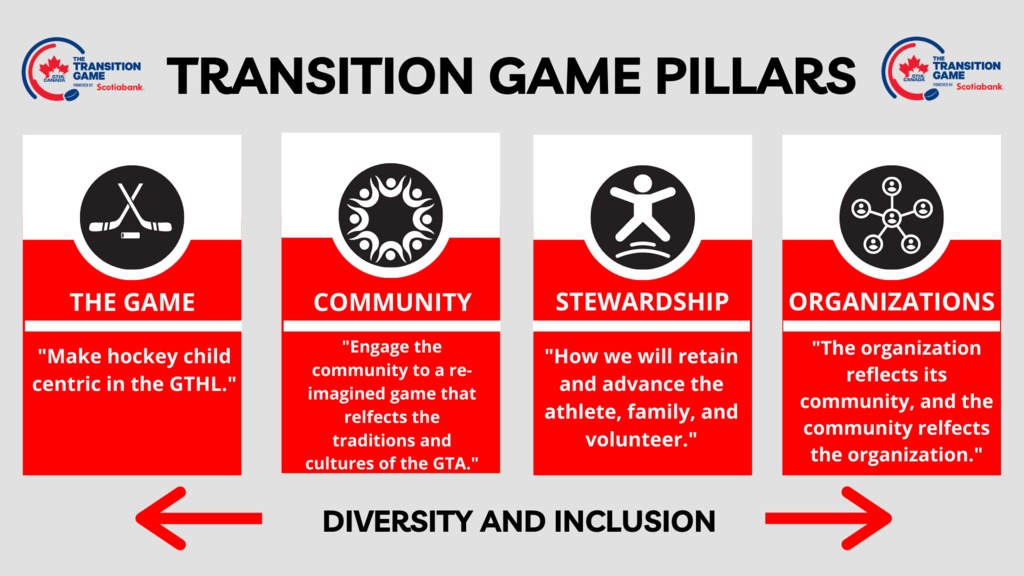 Independent Committee on Racism and Discrimination

Playing Together
-Study by the Institute for Canadian Citizenship

Getting Kids Active in Sports
-Tom Farrey, The Aspen Institute

Why People Participate in Sports
-Government of Canada

How Much Are Parents Willing to Pay to Put Their Kids in Sports?
-Ipsos

Swimming is the Most Popular Extracurricular Sport
-Ipsos

Thank you to all of our sponsors for their contirbutions to the GTHL Summit.