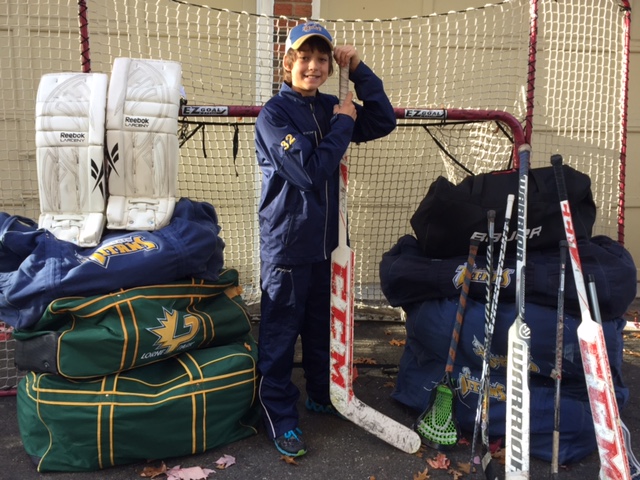 It all started with Carey Price’s Vezina acceptance speech. After being awarded the top prize for best goaltender in the NHL, Price – whose Mother is Aboriginal –  delivered an emotional speech about the struggles of First Nations youth. As Price spoke, Toronto Titans Minor Peewee goaltender Ethan Kowatsch watched.

“I saw pictures in school [of Aboriginal communities],” explained Ethan who has now been donating equipment to First Nations communities for the past five years. “I know how they only have roads in the winter and they don’t have much to do.”

Ethan, along with his friends and teammates, banded together to collect seven bags worth of hockey equipment. Hearing about his enthusiasm to help, the GTHL put Ethan in contact with Paul Harrison – a former Maple Leafs goaltender and OPP officer living in Timmins.

“I’ve long believed that any sport is a positive alternative to drugs and violence,” said Paul who picked up the seven bags for Ethan. “Playing minor hockey is the original drug prevention program in Canada.”

Paul has since assisted in delivering the equipment to the community of Fort Albany – a fly-in community located over 900km north of Toronto.

“I was asked by several parents on one of my son’s teams if they knew of anywhere we could send the equipment they had lying around in their basements and garages,” explained Christine. “I contacted a family friend running a hockey program in Sioux Lookout and he told me the things they had the biggest shortage of skates, helmets, gloves and elbow pad. They had no goalie equipment.”

After putting out a request for equipment, Christine was able to collect 10 bags of hockey gear, 25 sticks, and 3 sets of goalie equipment to send to a hockey program in Sioux Lookout.

“Our objective was to make sure the equipment was good quality, that the kids would be proud to wear,” said Christine.

The donated equipment is currently being used as part of a hockey academy program in the community. According to CBC, 105 kids are enrolled in the hockey program and attendance is up by 25 per cent since the program began.