Are you and your family new to hockey? Do you love the game but aren’t sure how to start? The Greater Toronto Hockey League has a number of opportunities for players of all ages and skill levels to Start Hockey.

The GTHL strives to remove barriers to participation, engaging League initiatives and partnerships that provide funding assistance for sport.

The GTHL Legacy Fund was established in 2011 in an effort to help families in need of financial support, and to assist organizations in funding hockey programs with a focus on child and community development.

Canadian Tire Jumpstart Charities (Jumpstart) also continues to make it easier for families to play the game they love. In partnership with the GTHL, Jumpstart offers Individual and Community Grants as part of the Playmakers Grant Program. For more information, click here.

To learn more about the most current funding opportunities, click here. 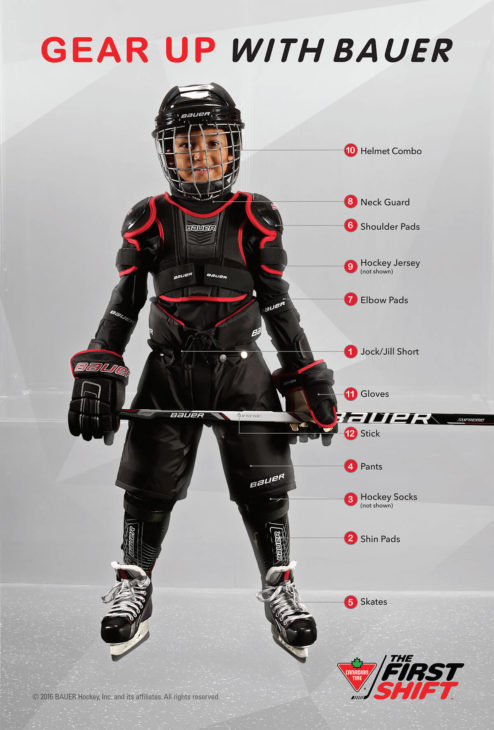 A: Yes, hockey is a safe sport for kids. Kids begin slow by learning the basics – first with learning how to skate, followed by how to use a stick as they get progress and get older. Hockey is also a very well-supervised sport with coaches, trainers, and volunteers present on-ice, as well as on the bench during games. Additionally, hockey is made even safer through the levels of protection hockey equipment provides. In fact, youth hockey players have visited emergency rooms across Canada less often than kids who play football, soccer, basketball, and/or wrestle.

Hockey is a great sport but just like all sports, it does carry some risk. The risk, however, is very low in the younger years.

Q: How much does hockey cost?

A: A common misperception persists among many that playing hockey is financially out of reach when, in fact, hockey is in-line with the cost of other sports such as basketball and soccer at the introductory and recreational levels.

Registration costs for house league can range from $300 to $600 for a season. A house league season usually includes one game and one practice per week. A season begins in October and runs through the end of March (approximately 24 weeks in duration). If cost is a barrier for your family, please visit the current funding opportunities available by clicking here.

There is an added cost that comes with purchasing equipment to play hockey. Hockey equipment, however, does not need to be bought every season and typically lasts a few years for a child – until they out grow items. For a child’s first time playing hockey, a brand new set of equipment can be purchased for approximately $250 to $300. Canadian Tire and Pro Hockey Life are both options where all pieces of equipment can be purchased. There are also stores that sell used equipment at a discounted rate such as Play It Again Sports. Additionally, many hockey associations receive donations of equipment when other players out grow items and may have equipment available for new participants for free.

Q: Is the GTHL just for boys?

A: Boys and girls are welcome to participate in the GTHL. The GTHL is proud to have many girls already currently playing in GTHL programming at all age and skill levels. In fact, many of our female alumni have gone on to enjoy successful hockey careers, earning scholarships at the post-secondary level while some have even become Olympians such as Team Canada’s Natalie Spooner and Laura Stacey. Logistically, when needed and/or requested, girls will be provided with safe and separate change room facilities.

A: Organized hockey has a reputation for being for mostly white and upper-class families. There are, of course, exceptions to this, however, in recent years, there has been an intentional and direct effort to create change. The effort has seen hockey organizations focus on making the game more accessible while ensuring all feel welcome to participate in the sport.

The GTHL began this work in November 2019 with the Transition Game Summit. The outcome of the Summit resulted in the development of the GTHL’s Strategic Plan released in August 2021. Among a number of items being executed from the Strategic Plan, the GTHL has begun engaging formal and informal partnerships including but not limited to: Jumpstart, Hockey Equality, Movember, You Can Play, Whitefish River First Nation, Canadian Blind Hockey, VOLT Hockey, NHL, NHLPA, and the Carnegie Initiative.

Additionally, to begin the 2021-22 season, the GTHL welcomed Seaside Hockey, an intro-to-hockey program in an under-served community in Toronto.

The GTHL has also taken an active approach in engaging its participating families to understand how we can better support and serve our community in a number of areas, including equality, diversity, and inclusion.

Q: What is house league?

A: Across the Greater Toronto Area (GTA), there are local community hockey leagues called House Leagues. House Leagues operate recreational hockey for players (including all genders) as young as four years old up to 21 years of age. House Leagues often provide learn-to-play options as well as skill development sessions to provide players an opportunity to have safe, fun, and meaningful hockey experiences as they progress in the sport.

Q: What is competitive and/or “Rep” hockey?

A: Within our communities there are also opportunities for players to participate in higher levels of competition. The higher levels are called Competitive (or sometimes referred to as “Rep” – short for Representative Hockey). These levels are classified as “A,” “AA,” and “AAA” (the highest level).

Do you have questions about starting hockey?