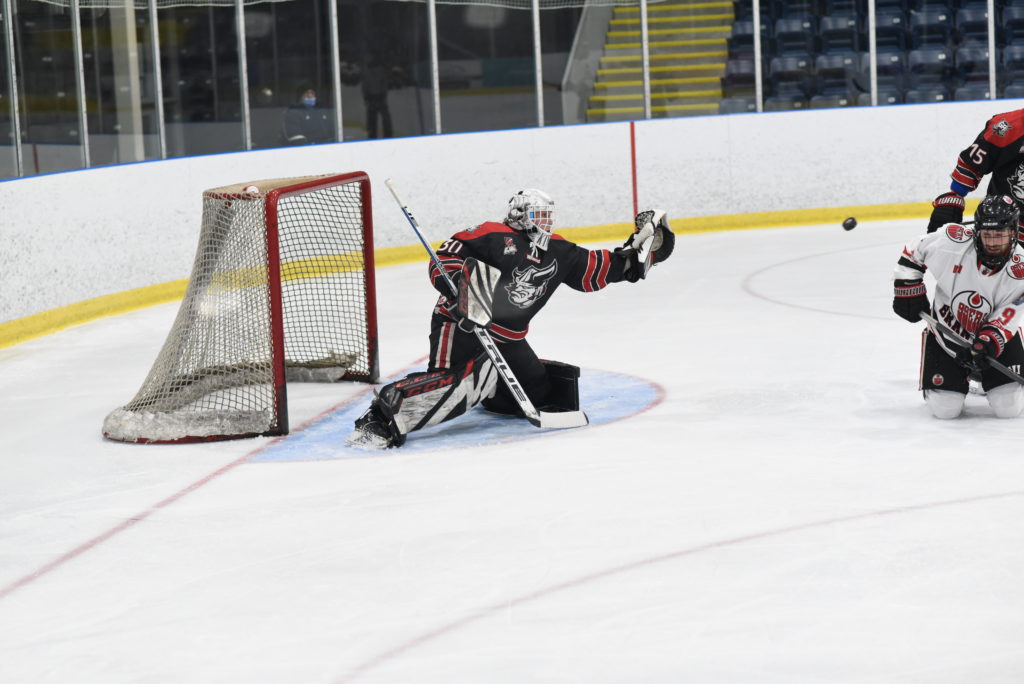 Mississauga, ON – The Ontario Junior Hockey League has named goaltender Mikael Kingo of the Georgetown Raiders its Humanitarian of the Year for 2021-22, the league announced today.

Kingo, a Greater Toronto Hockey League alumnus, was also recognized in 2020 as the League’s Roy Pejcinovski Memorial Goaltending Award recipient for his efforts.

The OJHL’s Humanitarian of the Year award is presented annually to the player “judged to have made the most notable contribution to his community in a humanitarian sense, included, but not limited to charitable work, school visits and extra-curricular off-ice activities.”

Kingo is being honoured for his work with the Angel Project. The charity was founded in 2008 by his mother, Lisette Kingo, after she visited Parkwood Hospital in London, ON where a family member worked. The family lived in Strathroy before moving to Burlington  when Mikael was 4.

“My family wasn’t really well off but we decided for Christmas that year instead of us getting gifts we would give our money to contribute to the patients at the hospital,” Kingo told The OJ Today TV show this spring. “That’s how it started and it’s just flourished and grown out into an amazing organization.”

Now, the Angel Project helps buy everything “from a $2,000 wheelchair to a $1 toothbrush,” as Mikael puts it. The Kingos and friends are filling gaps for purchases not fully covered by government funding.

The project assists with basic needs such as soap, shaving cream, shampoo and even simple comforts such as stuffed animals, soft blankets or gifts at Christmas for patients at Joseph Brant Hospital in Burlington and Parkwood.

The Angel Project also arranges patient outings and assists with the purchase of equipment, including wheelchairs, voice boxes and speech computers.

“Many patients spend decades in complex care units in hospitals and will never go home again,” Lisette said on theangelproject.ca website, “accident victims, MS, ALS patients and others who have been left without tools and the finances to fend for themselves and have been abandoned by their families and society. Hospital foundations are wonderful, however they have such a large need to fill that the social agenda and complex care units are often left to the last.”

To help raise awareness and funds, Mikael launched a hockey tournament nine years ago, to “skate for those who can’t.” NHL Hall of Famer Doug Gilmour and his wife, Sonya, are on board as ambassadors for the charity.

Mikael’s Georgetown Raiders teammates and the club’s staff members stepped up this season, raising more than $4,000 for a therapy dog and hosting a game-night teddy bear toss, all for the Angel Project.

“Mikael is a phenomenal human being,” said Jeff Angelidis, his coach and general manager in Georgetown this season. “And he’s a fierce competitor who wants the net. Phenomenal athlete, phenomenal person. I’ve said it many times, this young man has a bright future.”

Overhead costs at the Angel Project are nearly non-existent.

“It’s fully volunteer and that’s one thing that makes our charity pretty special,” Mikael said. “It runs from the heart, not by people trying to make money or make a career out of it. Just everyone trying to  help other people.”

“A lot of people love to receive gifts but the power of giving is a much better feeling. It’s just taking the time to put some work in, and I think that goes for every  aspect of your life.”

Mikael launched another program on his 15th birthday that annually provides goaltending equipment to one young player in need.

“When I was young, I was in that same situation,” he told the OJHL. “Now, I really have everything I need.”