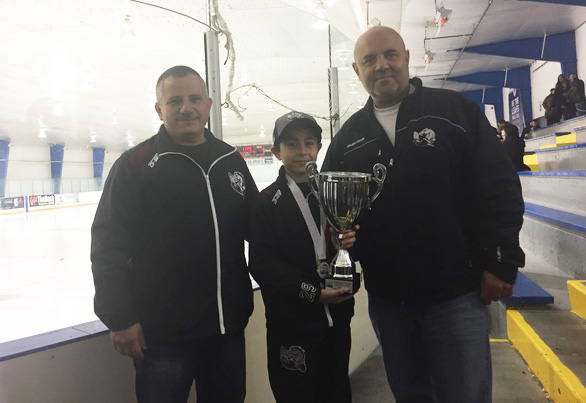 Coach of the Month, Presented by the Coaches Site: Carlo Morfidis
February 27, 2019
coach of the month development

Creating a welcoming and fun environment comes before positive scoreboard results for Don Mills Civitan Peewee Select Coach Carlo Morfidis. Starting off behind the bench in 2009, Morfidis has grown to love the coaching side of the game, sometimes coaching two teams a year.

“Carlo has dedicated all of his free time to help the kids make hockey enjoyable no matter what skill level they are,” said parent Thomas Odisho. “I have never seen a coach who puts the team before his personal life just to make the kids happy and enjoy hockey.”

In 2006, Carlo took on the challenge of coaching a Tier 3 team who still had a lot to learn on the ice. After a rough start, Carlo continued to encourage the kids and gave them ways to improve their game. By seasons end, the team was lifting a championship trophy.

Carlo doesn’t take all the credit for his team’s success, explaining that the kids put in a lot of work to get to where they are.

“Carlo devoted all his time to the kids and the kids played with their hearts and never let the coach down because they knew what Carlo has done for them,” said Odisho.

Playing for Ted Reeve during his minor hockey years, Carlo still finds time between his coaching duties to play twice a week.

“I started to play hockey when I was six years old and really enjoyed it ever since,” said Carlo, who wants to mirror his own positive minor hockey experience for the team he coaches.”I believe it’s more important to create a great environment and great memories for the kids and families than winning hockey games.”

Carlo has been named Coach of the Month for February. He will be awarded with a prize pack courtesy of the Coaches Site. Click here to nominate your coach now.