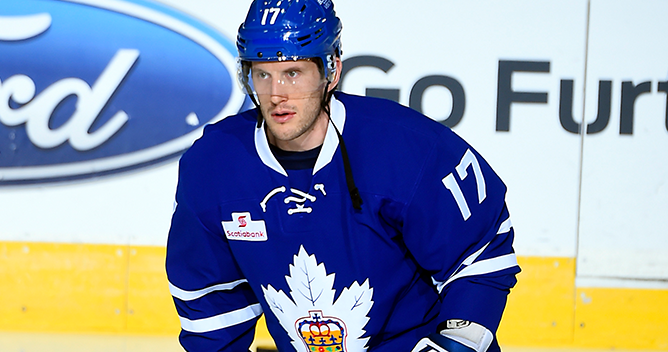 Rich Clune grew up in an era that had a different approach to mental health. Fifteen years after Clune graduated out of minor hockey, the “suck it up” philosophy is being phased out as conversations surrounding mental health are starting to take place. Clune, who played in the GTHL prior to his career in the NHL, experienced his own personal battle with substance abuse before seeking help. He has now become an advocate for various mental health-focused initiatives.

“I think having conversations about mental health is going to arm kids and hockey players with the tools to cope,” said Clune, who currently plays in the AHL with the Toronto Marlies. “Through my experience, I learned that its okay to ask for help and admit something is wrong and put your hand up.”

Clune, who was quick to endorse the GTHL’s mental health-driven Breaking the Ice campaign with Movember and Babsocks that launched in 2017-18, emphasized that players should not be ashamed of feeling vulnerable.

“When I was raised you were taught to never show weakness,” said Clune. “I think there’s strength and power in being vulnerable. There’s always help available to you. That’s the biggest thing I learned later on that I wish I learned earlier.”

At the minor hockey level, Clune believes that coaches should take the initiative to educate themselves on mental health resources and learn the red flags for individuals who may be struggling.

“I’m not saying coaches are going to prevent it completely,” said Clune. “It’s just learning different symptoms and signs to look for and know that may make a difference in that player’s life before its too late.”

As part of his advocacy, Clune recently stepped outside his comfort zone to take his hand at acting. The film, titled Hypostasis, explores the experiences of a man struggling with his own mental health. While the film is fictional, Clune worked closely with the writer who grew on Clune’s personal journey.

“He got a feel for what I’m like as a person, there’s for sure parallels. During my performance, I drew on personal experiences.”

Some proceeds from the film will go towards supporting various mental health associations.

The GTHL and Movember will be on site at Canlan, York University from September 21 to 22 as part of the League’s Mental Fitness Month initiative. Click here to learn more about the Get Ahead of the Game program and learn more about mental health resources.