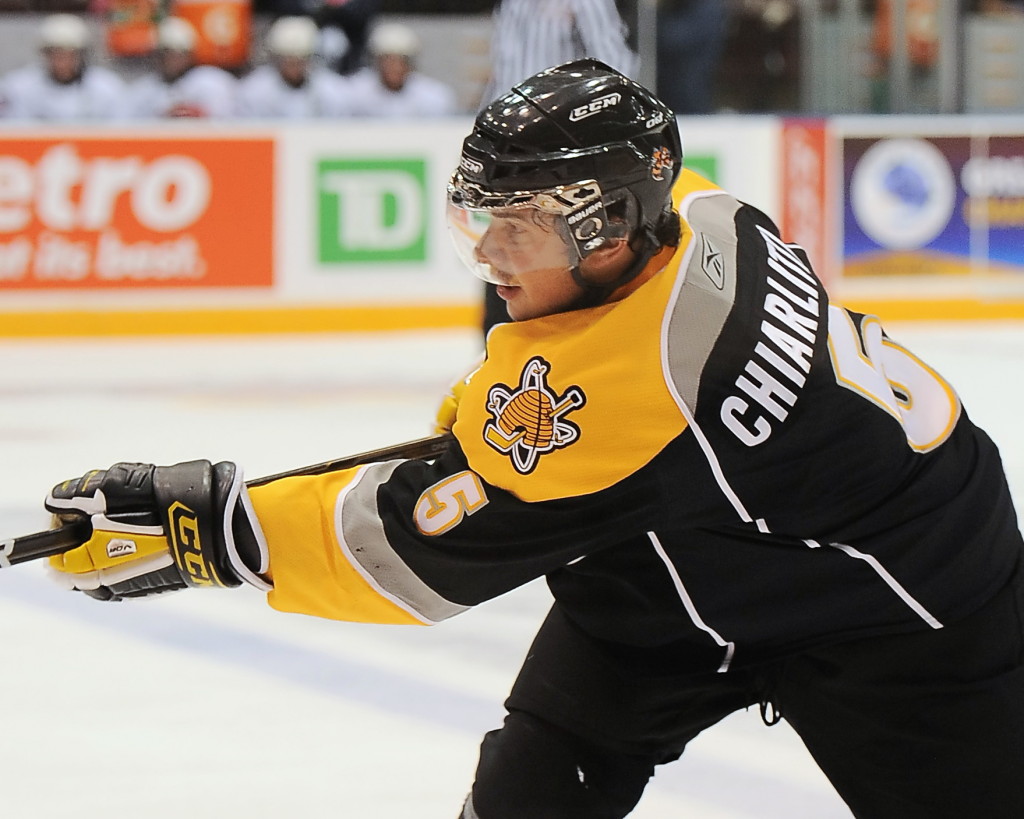 You May Say I’m a Dreamer
March 24, 2019
by
Andrew Boehmer
Breakout Magazine

Every kid has a dream. We’re told to shoot for the stars and expect we’ll get there. If we’re persistent enough with an undying dedication and a relentless work ethic, our dreams will become reality.

It seems so simple, but for a lot of us, we learn to understand and accept that our dreams won’t pan out the way we want them to. That alone can be so hindering to a young person’s development. However, the beautiful thing about dreaming is there’s always more to dream about.

Nathan Chiarlitti is more than a dreamer. Growing up, playing in the Greater Toronto Hockey League, the Ontario Hockey League and in University, he learned invaluable life skills that made his dreams become reality, even if they weren’t in his initial plans.

When you’re a young hockey player, the goal is to play in the National Hockey League and to hoist the Stanley Cup, so you do whatever it takes to get there. You play hard, you train hard and you do it all again the next day.

“Each year, hundreds of thousands of young players take to the ice, dreaming of a career in hockey, yet, only a few make it to the big leagues,” explained Chiarlitti.

Learning to adapt is important because change is inevitable, on and off the ice. If you don’t adapt, you’re not learning. As Chiarlitti transitioned from the GTHL to the OHL, the realization struck him – working harder was essential to reaching the next step.

Whether it was during his time with the Sarnia Sting and Owen Sound Attack in the OHL or St. Francis Xavier and McGill University in the OHA, there was a real necessity to adapt because he went from playing boys to men. When you become good at something, you don’t let up and leave it be – there’s no room for complacency.

“I found I had to play the game smarter and not leave myself exposed for big collisions, while working on my speed and strength so I could be a difference maker for my school.”

Those lessons he took from hockey transitioned to his advancement as a student, which alongside the game, were training him to achieve dreams he didn’t realize were within reach.

In Junior, Chiarlitti developed a passion for human anatomy because of injuries from the game. He then decided to continue his education by pursuing a Bachelor’s Degree in Kinesiology and a Master’s Degree in Exercise Physiology, while still playing the game he loved.

“The biggest lesson hockey taught me is to be resilient,” Chiarlitti explained. “When I wasn’t drafted, despite having those expectations, I had to pick myself up and work harder than I had before because I knew that if you want something bad enough, you won’t stop until you get it.”

The disappointment of not making your dreams a reality is tough. Three NHL Drafts and two years of rejection from Medical School later, Chiarlitti knew he could not let these inconveniences hinder his maturity and get the best of him.

Although Chiarlitti’s dreams of playing in the NHL ran its course, his eventual acceptance to Medical School was just the beginning of a new one. The lessons he learned from the game were ones he had to apply to his determination to become a doctor.

With persistence, an unmatched dedication and a relentless work ethic, his dreams were attainable. Most people would see a pattern in applying similar lessons and assume if they didn’t work before, they won’t again.

Chiarlitti is now in the process of completing Medical School at the University of Ottawa and still dreaming. Realizing he could help others aside from his career as a doctor, the former Toronto Marlboro is writing a book entitled More Than a Game, which chronologically discusses his development and transition from hockey to his development and dedication to pursuing your dreams in life.

“I’m writing More Than a Game to make a difference in the way people think about hockey,” said Chiarlitti. “If anyone involved in our sport looks beyond results and realizes what hockey can do – the lessons it can teach, the character it can build, I’ll be a happy man.”

A successful hockey career shouldn’t be defined by championships won, records broken, or contracts signed. Hockey develops important qualities to help players in their everyday lives. It’s over 20 years of experience that shaped Chiarlitti’s new vessel, a means in which to inspire players, parents and coaches.