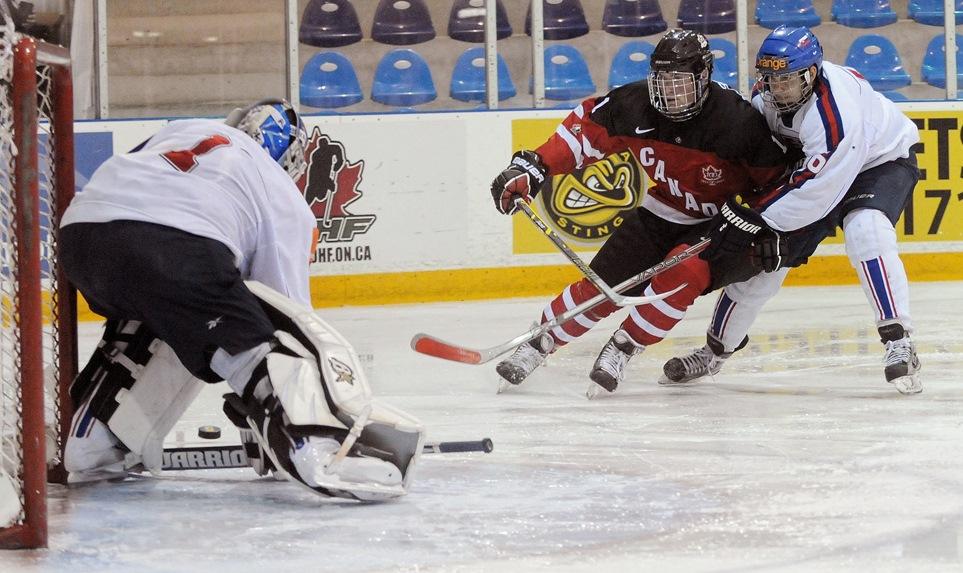 With the World Under-17 Hockey Challenge underway in Sarnia-Lambton, Ont., 66 junior-hockey players from across Canada are suiting up to impress at the 24-game event.

Now in its 23rd year, the showcase is a little different this time around. The tournament originally divided Canada into five regions – Atlantic, Quebec, Ontario, West and Pacific – but this year’s rendition will see players sorted into Canada Red, Canada White and Canada Black.

Of the 66 players selected to participate by Ryan Jankowski, Hockey Canada’s director of player personnel, and his team of regional scouts, 11 have GTHL roots:

Jakob Chychrun
Taken first overall by the Sarnia Sting in last spring’s OHL Priority Selection, Chychrun has tallied eight points in 12 games so far this season. Expect a lot of poise from this 16 year-old – Sting head coach Trevor Letowski hasn’t been reluctant to use Chychrun in the final minutes to defend a one-goal lead.
NOTE: TSN Hockey Insider Bob McKenzie announced on Sunday that Chychrun will miss the tournament due to injury.

Travis Barron
Chychrun’s teammate with the Toronto Jr. Canadiens last year was taken third overall in the 2014 OHL Priority Selection and also has eight points in 12 games so far this season. He’s a big player who loves to play tough and physical, while working down low and taking the puck to the net. Any surprise that he looks up to Milan Lucic?

Taylor Raddysh
Barron’s childhood friend was taken 19th overall by the Eerie Otters and has racked up eight points in 12 games with the Midwest Division leaders. He led the OHL Cup last year with five goals and 14 points, so you can expect to see his name on the score sheet.

Jordan Kyrou
Kyrou was taken in the second round last spring (38th overall) and has managed six points in 12 games with the Sarnia Sting this season. A strong first impression at training camp landed him a spot on the Sting roster after he accumulated 40 points in 33 games with the Mississauga Senators last season.

Michael Pezzetta
Pezzetta was taken 11th overall by the Sudbury Wolves last spring and scored his first career goal in his OHL debut. Look for Pezzetta’s smooth skating and crisp snapshot as he reunites with Kyrou, his former Mississauga Senators teammate.

Michael McLeod
The former Toronto Malboro and now fifth overall pick of the Mississauga Steelheads has garnered two points in his first 10 games. Fans will notice McLeod on the ice – his skating ability is one of the best in his age group. Coupled with his vision as a playmaker, it’s easy to see why he received OHL Cup MVP honours.

Givani Smith
The Thornhill, Ont. native was taken 13th overall by the Barrie Colts and has notched one point and a plus-2 rating so far this season. The former Mississauga Senator will again be facing kids his own age, so the physical aspect of his game will make him key contributor along the wall and down low through the cycle game.

Victor Mete
After being selected eighth overall by the Owen Sound Attack in the OHL Priority Selection, the defenceman was traded to Dale Hunter’s London Knights and has two points in 13 games. The U-17 tournament will give the former Toronto Jr. Canadien an opportunity to show his offensive upside and smooth skating.

Reagan O’Grady
The defenceman was selected 15th overall by the Kingston Frontenacs and has yet to register a point for the black and gold. The solid defenceman has the potential to have a significant impact at both sides of the ice.

Cliff Pu
Selected by the Oshawa Generals with the 16th pick last year – right after O’Grady, his former Toronto Marlboros teammate – Pu but has only played one game in the OHL this season. His offensive flare – 44 points with the OHL Cup champion Marlboros in 2013-14 – and strong, psychical presence will make him a key cog in the Canada Black lineup.